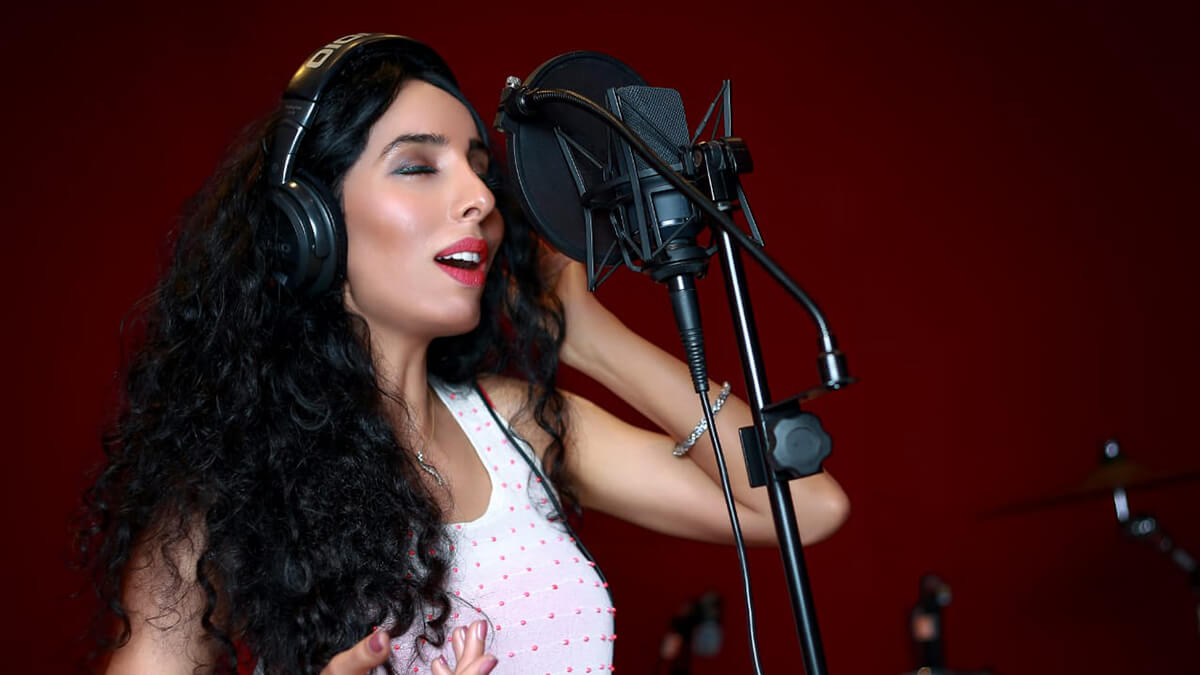 Always seeking an escape from the conventional way of living life, Arzutra Garielle never thought she could be a singer until one day she signed up for an acting course to impress a guy. Although that relationship didn’t work out, it gave Garielle a new love for singing which she cherishes a lot.

In an exclusive conversation with QNA, Arzutra talks about her journey, her inspiration and her struggle with Hindi, and much more.

How did you decide that you want to pursue your career in singing?

Arzutra Garielle: My family wanted me to go to school, the university then work as I had a traditional upbringing, however, I was never excited about academics. I was always trying to find some kind of escape from school, college, and even university. I used to skip lessons and have lots of off days. I always found more joy in doing something of an artistic nature. I was constantly looking for ways not to follow the ‘normal’ conventional path. Although I had a deep desire to do something creative, I never dreamed to be a singer. In fact, I didn’t know the power of dreams in those days. As a child, I thought dreams were just something that happened when you slept. It never occurred to me that you can have a dream and live that dream too. It sounds weird! Doesn’t it? I know. So it wasn’t until one day when I met a guy who was into acting. I signed up to singing lessons merely to impress him. My first singing lesson was 10 years ago and I booked it just to appear more exciting to him. In fact, I did it to impress him. Little did I know he was the trigger behind a new chapter of my life – making my Debut Album. People don’t just get up out of nowhere and work on Albums. I worked for it. 3 months later, our relationship ended. Whilst my love life ended, but my musical life began. I never looked back since.

Tell us about your journey, how did you start?

Arzutra Garielle: I never wanted to be a singer. Somehow, I attended my first singing lesson, it was never with the intention of wanting to be a singer. In fact, looking back on it, it was far from. Is it silly to say I just fell into it? I mean, on the one hand, I believe in God having everything mapped out for everyone. But He doesn’t do a great job of telling us right. This was a classic example of that only, where for the first year, I was really just dabbling with lessons and enjoying them, but nothing serious intended. After one year, I met a friend who suggested me to make a song as my voice was nice. So I went along with it. Though I made an English song called ‘Feel It.’, I was far from ‘feeling it’. But one thing I realized in the whole process that I wanted to sing in Hindi. That was my main influence during that period, and when I realized this fact, I started enjoying the recording process. It was kinda fun. 9 years later, I recorded around 30 songs. I absolutely love Studio work. Making music has become my life now.

How has Bollywood inspired you?

Arzutra Garielle: Bollywood has given us so much creative inspiration from fashion to music to film and much more. However, I was most attracted to the music as that’s all I was excited about when I sat through many hours of movies with my father. It’s the only thing to which my soul could relate to. I was attracted to those haunting melodies. Even still I am. That’s why a lot of my work I do with my current producer, Atif Ali, is very much centred around melodies first and foremost. As a girl who grew up studying English at school, I really used to find Bollywood language exotic. I remember when I used to watch Rishi Kapoor’s movie ‘Yeh Vaada Raha’ with my dad on a loop. It was so sad to hear about the death of Rishi Ji. The actors like him made Bollywood what it is now. Whilst I was more into songs than acting, I would not be who I am if it wasn’t for the movie itself. I respect and appreciate that Bollywood is not just entertainment. For me, Bollywood meant learning from the greats. I became obsessed with melodies. I studied them for hours and hours, without any pause. Bollywood has taught me the art of melodies. I truly thank the talent behind those movies which have given us so many fine artists from whom we can learn so much.

Who is your role model and how has he/she inspired you in the field of singing?

Arzutra Garielle: I have several role models. From India, it’s Lata Mangeshkar and Shreya Ghoshal. Lata Mangeshkar is a true gem. Any singer, who is singing in the Indian language, must be having Lata Ji at the top of their list of role models. That too for obvious reasons. Shreya Ghoshal, I don’t know, how she became a role model, but I think it’s more her expressions in her voice. I knew I wanted to sound like her. Don’t get me wrong; I don’t want to lose my own voice identity, but when I was developing my skills in the earlier days, I just enjoyed listening to Shreya Ji out of all of the other singers such as Chitra, Alka Yagnik, etc. Shreya Ji was at the top of my list. If there is one singer I wish I could sound like, it has to be Shreya Ghoshal. I wrote a letter for her when I was young. I still have it. My dream is to meet her and give her the special letter one day.

How did you learn Hindi and how difficult was it for you to sing a Hindi song?

Arzutra Garielle: I still haven’t learned Hindi. Up until now, I get songs written for me, sent to me and I do not understand 98% of the words. Some of the writers I am working with lately are giving me much deeper lyrics and it’s just getting harder and harder. When I decided to sing in Hindi, many people advised me to go and have Hindi language lessons in London and practice speaking it with people. However, most of my friends were English. Plus I was not drawn to taking up lessons for some reason. I think I saw it as unnecessary. In hindsight, if I could reverse the time, I would have taken Hindi lessons. You know what, I think it’s fair to say I have learned my Hindi from Lata Ji and Shreya Ji. I sang along to their songs daily. They are my true teachers of Hindi. Not to mention I listened to Hindi songs throughout my childhood. I know this doesn’t compensate for taking formal lessons, but I think I have done ok. Pronunciation in the studio is a killer where I have to re-take some words over 100 times. When the final takes come out, I and my producer both get frustrated. Now I acknowledge that I sing Hindi better than I speak it.

Why did you decide the name of your Album Wo Pal?

Arzutra Garielle: The lead song on the Album is ‘Woh Pal’. I toyed with well over 500 album names. I then decided to stick to the lead song name as for me, the two words profoundly capture everything about Love. As love is the deepest topic out there. For me, love is never about the future. It is always about memories. It is about the present moment turning into history. Whether it’s good or bad one, love is about the fact that everything settles down to dust apart from memories of love between two souls.

You are a pop singer and now making your debut in Bollywood with your album, how difficult it is for you to manage all the genres?

Arzutra Garielle: It’s the hardest thing I am doing to date. Currently, I am working on my primary genre –Soul. However, I’m also working on upbeat dance songs as I need to make sure I have Live stage show material. As a new artist, it’s so hard getting gigs in the Asian Music Industry without having upbeat dance songs. I have no choice other than to diversify – My 2nd album may have more downbeats, but I’m experimenting with Sufi styles too. Sometimes, I feel that I shouldn’t experiment so much, but then I guess I am still finding my own style.

One message you would like to tell all your fans?

Arzutra Garielle: My one message to my existing and future fans is to always follow your heart & run away from anyone who says you can’t do it.