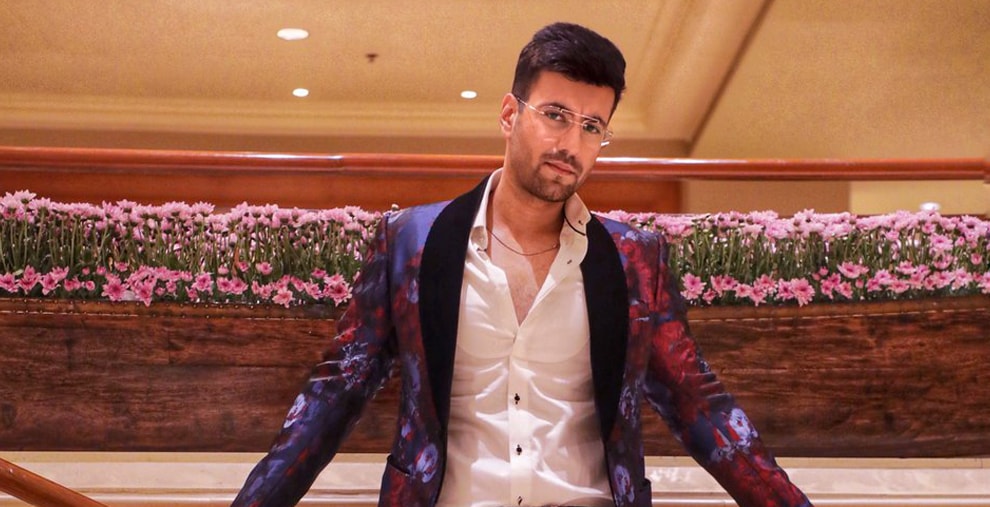 With a huge female fan following and quite an interesting persona, the assistant director turned actor Karanvir Sharma has come back with the film ‘Blank’. Read what he has to share about his journey in the industry, some interesting tips and his character in the latest release.

Karanvir, please tell us about your journey of becoming an actor.

Karanvir: My journey has been an extraordinary one. It started with a small acting stint when I was an assistant director. One day, unfortunately, the actor couldn’t make it to the shoot, and everyone was panicking at that time. So the director, Bharat Bala asked me that it’s just a matter of one line. And, obviously, when there is a crisis on the set, one who is remembered is the assistant director. I did that one line scene as the background artist and everyone present there appreciated my work. They even increased my lines.

Although I was an assistant director, so I didn’t pay much attention there. I always wanted to get into direction. It was later when I met Anupam Kher. He talked me into trying out acting. Then I did an acting course from ‘An Actor Prepares’. After that, I remember my first stint was when I was offered a film – Saada Adda which was by the writer of the film Rockstar. That was my first project as a ‘proper’ actor.

Before that, I used to work in ad films and my first ad project was for Dubai campaign for Porsche, the sports car followed by quite a lot of ad films. Hence, it has been quite good actually. Went down doing around 300 commercials in the span of 3-5 years, learned a lot. It has been a good journey, then I was offered ‘Zidd’ with Anubhav Sinha and directed by Vivek Agnihotri. That surely got me a lot of eyeballs for my performance. Then a TV show called ‘Siyasat’ also happened.

And it has been good since then…balls were rolling in a certain direction, and then I thought acting can come into the forefront. But having said that, I would definitely want to take up direction eventually. I wish someday I could direct, that is the passion which I have which has lingered on. So eventually, I see myself as the helm of a director.

Karanvir: If you ask me between web series and movies, honestly it really depends on the character and I have been fortunate enough to work with the stellar directors of the industry. Like, I did a project called ‘Haq Se’…so the whole set up has been good like more like a feature film. Web I think is a medium where I think the audience just grows. You have to be very strong on content. With films it’s a different high, it’s a 70mm screen and you know the charm of cinema and watching it in the theatres and watching yourself on the big screen…nobody can really take that away.

So as an actor, I would really believe that you know it’s the role that excites me more. I can’t really choose between the mediums, but if I have to choose I think I will choose everything. I don’t want to limit myself.

What are your dos and don’ts for the industry?

Karanvir: The biggest thing as an actor, you should do/ have is ‘perseverance’ – it’s what really takes to survive in this industry. And, especially being an outsider in this industry, one thing I have learned is that along with perseverance, you need a lot of patience, also you have to be ready for any opportunity that comes to you any given time. More than that what you can follow is, to be on time to the sets, keep your work at the most escalated high level of importance in your life.  Be humble, nice and a good actor.

What not to do is also very simple – never be late on the set, never disrespect people, always listen. Don’t have your own point of view always because you are just a speck of dust in this big industry don’t ever throw attitudes and tantrums.

You have a huge female fan base. Your comments on that.

Karanvir: Yes, I saw that trend happening when I did ‘Zidd’. After that, all my characters have been loved by all, especially the younger generation and females. I think this started more when I did ‘Girl in the City’.

Even in personal life, women have been very important in my life you know, as far as friends, family, people I have worked with are concerned. I think they have a better perspective on life and they show you the reality of life, they are the best people, best judge and best moral support you can get.

So I am really glad and thankful that I have that the moral support of my female fans.

Tell us something about your character in ‘Blank’?

Karanvir: If you speak about my character in ‘Blank’, my character is Rohit, a Chief associated with Sunny Deol, Mr. Deewna in the film. My basic motto remains that I have to get the job done and I am on the line of fire I am there in action, the only protocol followed by me is only according to my terms. I follow Mr. Deewn’s protocol but I lend him my support to collect information, interrogating the terrorists, the terrorist organisations, because I am the one who is always on the move, always in action.

That’s what I am doing and it’s very exciting, there is a lot of action. The most interesting thing about my character is that he punches first, and then asks a question

Related Topics:Karanvir Sharma
Up Next