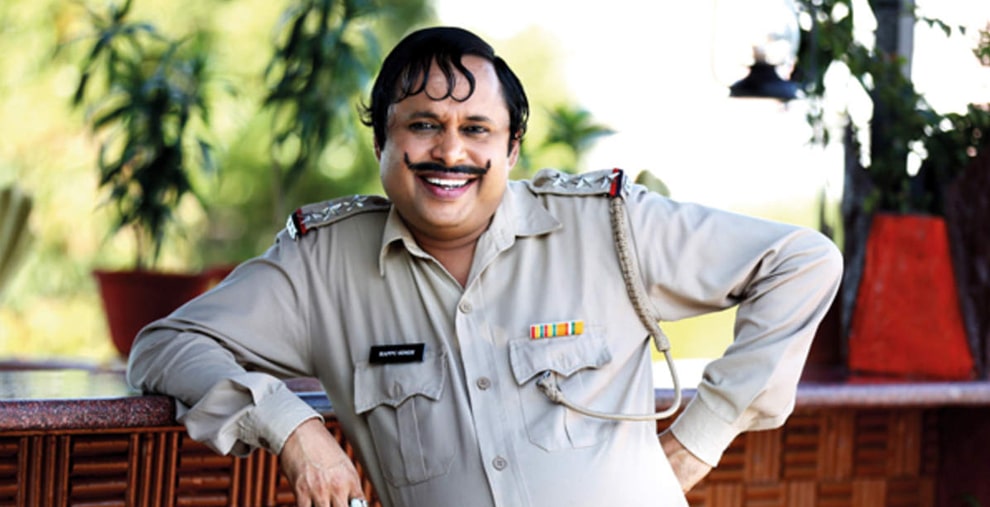 After appearing as different characters over the time in F.I.R., and finally getting his own identity as ‘Happu Singh’ from ‘Bhabiji Ghar Par Hain’, Yogeth Tripathi talks about his long journey of thrive, hardwork and happiness in the industry for over a decade now.

Tell us about your journey of becoming an actor?

Yogesh Tripathi: It’s a long story. I am basically from UP. Except me, everyone in my family is a teacher. So, after completing my graduation.. I joined theatre in Lucknow. I did a lot of plays, street place there and then finally after 4 years I left for Mumbai.

Here, I started with Ad films. After a while I got a chance to work with Shashank ji in F.I.R. So, for 6 years I was indulged in the show. After that I got an opportunity in ‘Bhabiji Ghar Par Hain’, for which I was associated with for 4 years. And now that a new show has been made on my character – ‘Happu Singh’ itself, I am doing that show presently.

So, this is how time flew – 10 years in the industry with same unit.

You have done many roles before ‘Bhabhi Ji….’ Which is your favourite role till date?

Yogesh Tripathi: There were many characters I played in F.I.R. Every second or third day, as the story required, my character was changed. So, there were so many roles I played. But if you ask about my favourite role, then it is definitely ‘Happu Singh’.

Why is it your favourite role, out of all the characters you have played so far?

Yogesh Tripathi: It is my favourite because of the versatility of the character. The small elements of how this character has been written are absolutely amazing. It is a lot of fun to play this character and also, undoubtedly people are loving this character too.

People are so happy, they laugh with this character. Even I hear it from them that when ‘Happu Singh’ comes on the screen, they start laughing. Whether there are dialogues or not, they just like the presence of the character. They say ‘aapko screen pe dekh k mazza aajata hai’. From kids to old people – everyone likes this character and enjoys watching it. It is a good thing, because there are very rare characters which are like by all age group people.

So, this is the reason that I am so happy and content with this character. I love doing it, they love watching it. And what could be possibly better than a show being made on this character.

In ‘Bhabhi ji….’ Happu only had a role. But now it is a show in itself. How do you feel being associated with this character?

Yogesh Tripathi: I am feeling very happy and grateful. I never thought that what hard work I was doing on this character for 4 years, it will pay off like this. I just thought that maybe in ‘Bhabhi ji….’ only there will be a possibility of showing my family. Never thought it will be altogether a different show. So now, this happiness is bigger and greater.

And now in this show, I get a chance to shoot different and better sequences.

All your characters are a bit edgy. What do you feel about it?

Yogesh Tripathi: Not only on Tv, even in theatre I have done such varied roles. And the first opportunity I got was F.I R….so in that the storyline was only such that I was required to do such edgy characters. To be honest, I never came across a role in which I had this normal look, and the boring acting was required. But let us see, if I get an offer like that, we will even try to work for it and see how it turns out to be.

Do you want to say something about the producers of this show?

Yogesh Tripathi: Absolutely. They are the reason I am here. I thank them with the core of my heart. I feel both of them have been always supported me….Sanjay ji…since F.I.R…I believe he has given me the opportunity which has been a step ahead from my talent always. That belief they showed in me. Without a single audition. That I will be able to pull it off, it means a lot for me as an actor. And even I feel happy that I did not disappoint them.

So I really feel thankful and grateful for the trust they have shown in me. For the work I have been doing with them for so long now. It is a two-way thing in our relation. Naturally they like my work that is why they have been offering me such roles. And I definitely love working with them.

What are your future plans?

Yogesh Tripathi: Nothing as of now. The show is very new and has good response. So, I want to work on one project at a time. But maybe if any opportunity comes that can be managed with this show, then it is different. But I have always believed that when you have one work on your plate, do it with full dedication. Once you are through, then you can find another one. Because as the shooting schedule and demand of the show, you cannot do 10 things at a time. Honestly, you spend almost 12 hours a day on the sets. So, no energy is left to do anything else in the time which is left.

So right now the plan is to take this show to the level of ‘Bhabhi ji…’ People should love this show like they did ‘bhabhi ji….’ Right now the whole team is working on this.

Related Topics:Yogesh Tripathi
Up Next