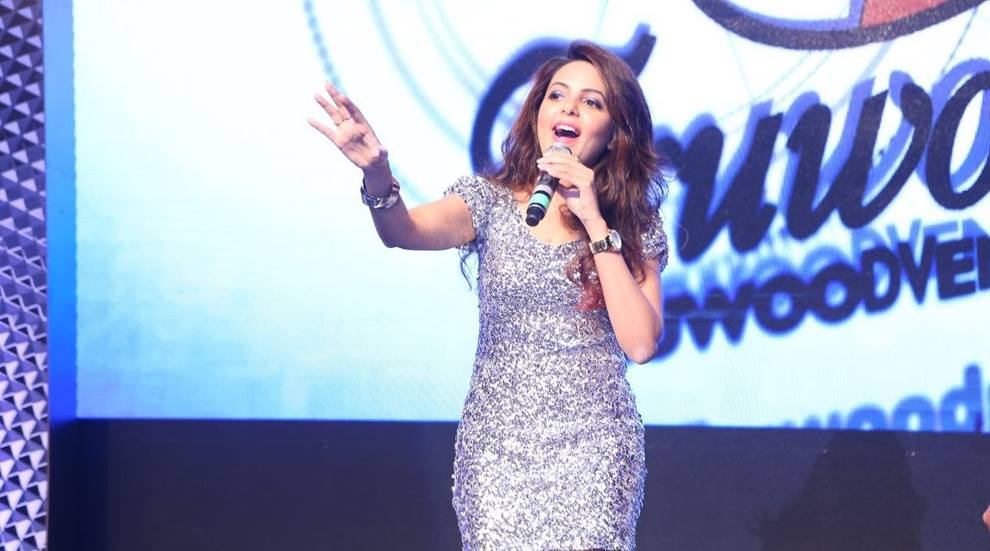 A Renowned Comedian and Bollywood Singer who has become the integral part of lives of all Indians throughout the World… Sugandha Mishra.

Classically Trained from her Grand Father The Legendary Pt. Shankar Lal Mishra disciple of Ustaad Amir Khan Sahib. She was the Finalist in the Reality Show Hero Honda – Sa Re Ga Ma Pa Singing Superstar and The Great Indian Laughter Challenge by which she won the heart of millions of people throughout the country. She debuted her acting career in Film Heropanti. Currently she is appearing in The Kapil Sharma Show on Sony TV and The voice India kids on &TV.

Excerpt from an interaction with Sugandha.

Sugandha Mishra in her own worlds…

I’m interested in your musical roots – which musicians and singers have been the greatest influence?

Sugandha: I belong to a family of musicians and blessed to have a guru at home my loving grand pa my dada guru Dr. S.L. Mishra. (Music maestro). I belong to Indore Gharana so i my singing is influenced by legend Ust. Amir Khan Sahab.

I was 4 when i started getting training from my grand pa.

Do you have favorite places or times where you like to sing?

Sugandha: I like to sing Weneva. I just want to be myself, do rehearse every morning, swar sadhna, and ofcourse live stage singing also in front of music lovers.

Do you ever get nervous?

Do you prefer on specific genre of music over any other genre? If so, what genre and why?

Sugandha: Classical music, fusion why because i am a trained classical singer, and thru training i got to know classical is the base for every genre. “Swar gyaan” its like ABCD of English language. Also i feel the power in swaras and different ragas which just bring u closer to almighty.

The best thing you’ve ever done?

Sugandha: That i learnt classical music with full dedication from my dada-guru.

Who is your favorite singer whom you have worked with?

Sugandha: My favorite singer is Lata ji and sonu nigam ji. I have worked with Sonu sir (performed in awards and live shows) and he is brilliant.

You mentioned in a interview that “I am here because of Kapil bhaiya”. What role he played in your success?

Sugandha: Its a long story. It would be great if you get the details from that article. But in short would like to tell you that he played major role in bringing me to Mumbai, we both were in same college, he is family to me, so he convinced my parents that they should send me to Mumbai and allow me to participate in a comedy reality show.

Sugandha: Dr. Mashhoor Gulati, and also i love my own character it’s a crazy one “Teacher Vidyavati”.

Any other love than Music & Comedy?

Sugandha: Music is my first love and will always be.

Where do you get your crazy ideas?

Sugandha: Hahaha. Well that’s a crazy question..!!! Well… I think i am blessed to be crazy in that matter.

Sugandha: What i don’t like is there are very few girls in the field of comedy, it should not be a male dominant field. More girls should explore themselves.

Any emotional part in your life?

Sugandha: I am a very emotional person, i miss my grand pa a lot. I am extremely attached to him.

If you had to change your name, what would you change it to?

Sugandha: Mmm well i would prefer a shorter one.. May be just three words like Jia, Ria, Tia.. But i have a nick name Ritu. I like it. Its quite short. And my loved ones calls me from that name only.

What do you do to have fun?

Sugandha: Don’t need to do anything, i just be myself, enjoy every moment. I am a fun loving person, each and every moment is fun for me. If it’s not i make it my way.

Are you a morning person or a night owl?

Sugandha: I am completely a Night Owl, can’t help it because of off shoot timings and travelling schedule. But i personally like to do a lot of creative stuff in the night like singing, composing, scripting etc. With more concentration.

Related Topics:Sugandha Mishra
Up Next

Shweta Tripathi: Journey On The Rise