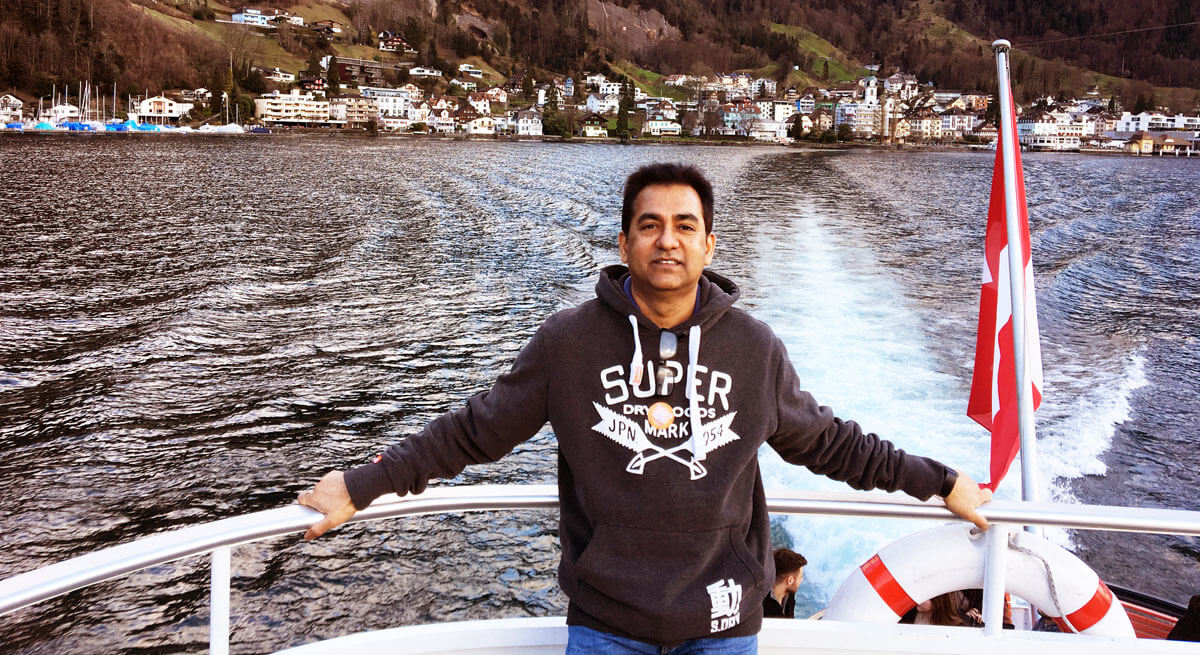 UK-based writer-lyricist-composer Gyan Sharma recently released a beautiful song Reto Ke Ghar on YouTube. It caught the fancy of listeners, emerging a runaway hit. We spoke to him to find out more.

Your debut single ghazal Reto Ke Ghar is a success, with the video crossing 1.5 lakh views on YouTube. Did you expect it to become such an instant hit?

Gyan Sharma: I was very hopeful about my ghazal video, but I was not expecting that it will become so popular within only a few days of its release. Any ghazal or song has four important ingredients that are necessary for it to be loved by the audience – meaningful lyrics, nice composition, good music and soulful singing.

I believe this ghazal has excelled in all of these parameters. So no wonder it has been appreciated by so many and it gives me immense satisfaction.

For Reto Ke Ghar, you have focused on the depth and meaning of the ghazal, with the lyrics having a very sentimental touch. Was that a conscious effort?

Gyan Sharma: My attempt to always be a perfectionist, is the reason why I don’t do anything for the sake of just doing it. I write my own ghazals and I believe that is one of the ways to express my feelings and emotions.

The idea of a ghazal comes from the heart, but I try to play with words to give it a deeper meaning and depth. I always say, a ghazal or ‘sher’ is a two-line magic. In two lines, one can express millions of emotions and that is the beauty of this art. If the magic of depth is missing from a ghazal or ‘sher’, then it becomes a very ordinary thing.

You have collaborated with ghazal maestro Talat Aziz who has arranged the music for your number. How was your experience working with him?

Gyan Sharma: My experience of working with Talat Aziz saheb was very good. He is a hugely talented musician and he arranged very suitable music according to the emotions of my ghazal.

Have you had former training in music? How did your interest in writing, singing and composing ghazals come about?

Gyan Sharma: When I was around 15-16 years old, I started formal ghazal singing training under late Ustad Nasir Khan saheb in Kanpur. However, due to academic pressure and the large importance placed upon schooling, particularly at that time, I had to stop my music training within a year. Since then, I haven’t taken any formal music training.

For my own singing, I was always looking for good ghazals which were meaningful and easy to understand, but I found it a very difficult task. So I said to myself, why not start writing ghazals myself.

How is the ghazal scene in UK? Are there many connoisseurs of this art there? Do only Indians show interest in ghazals, or even Westerners?

Gyan Sharma: Ghazals are popular among a mature Indian and Pakistani audience in the UK. Anup Jalota saheb regularly visits the UK for his ghazal concerts. I don’t think the English audience is able to understand ghazals, as the wordings and meaning takes greater importance than the tune and rhythm.

We hear that you are into many other things apart from music. Can you elaborate on the various ventures and interests which keep you busy?

Gyan Sharma: I am a computer engineer and ‘PRINCE-II Practitioner’ certified independent IT consultant, currently working as an IT process improvement consultant for the British government.

I am also the founder of ChillyEvents.com, an event management company based in the UK. We organise musicals concerts in the UK and India.

I am also the partner and director of GovernanceToday.co.in, a media company in India, which organises government events.

Got to know that you have also written a ghazal dedicated to PM Narendra Modi, and even a poem about the abrogation of Article 370 in Kashmir. How have these been received by the listeners?

Gyan Sharma: I have written a ghazal on PM Modiji during the 2019 elections. There is one ‘sher’ for each scheme of Modiji like ‘Ujjwala’, ‘Swachh Bharat’, ‘Aayushman Bharat’. This ghazal became very popular during the 2019 elections, and a couple of artists in India also sang and uploaded it on their YouTube channels, in their own composition and voice.

Gyan Sharma: I have not decided that yet but if anyone wants to record it in their own voice, I am ok with that. Both are good creative items and they should certainly reach to the masses.

We wish you all the best for your future and look forward to knowing more soon.

‘You’re not worth a sorry’: DJ Paroma’s loud message for people who don’t deserve it