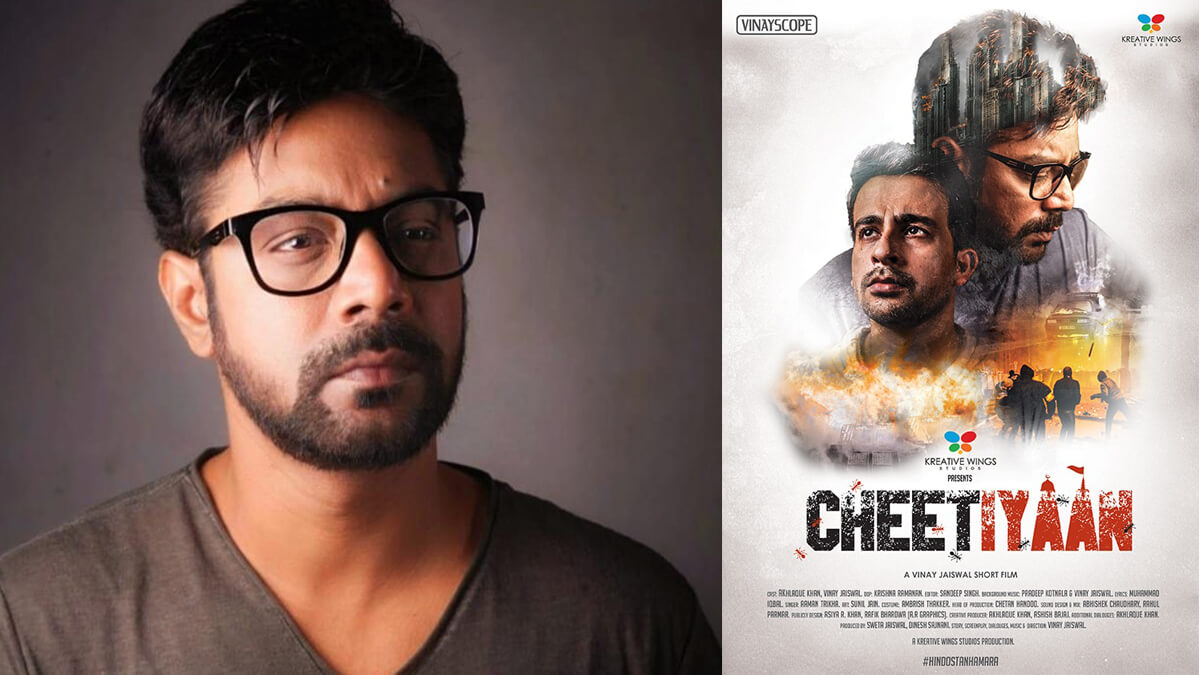 Juggling between different roles of cinema like writing the script, directing the film, acting in it as well as even taking care of the editing and music, it has been a fun 9-year journey for Vinay Jaiswal. The director has made his acting debut with ‘Cheetiyaan’ – a short film written and directed by himself.

In an interview, he talks about different roles he plays on set, difficulty in managing the roles, future plans, inspiration, etc.

What, in your opinion, is the most important quality in a film director?

You have directed as well as acted in Cheetiyaan. How difficult was it for you to carry out both the roles?

Vinay: Honestly it wasn’t very difficult as I had been trained for it, keeping this aspect in mind. First, I used to set up the shots and the design and then I made my blocking with the help of DOP Krishna Ramanan, and my AD. Once that was done, I switched myself into an actor and took the position, in the next 20 seconds or less, I was just an actor giving my shot with character, dialogues and expression. Once the shot was done, I used to check it on the monitor just the way I would do as a director. Either I approved it or rejected it, or if in case the shot is not proper I went for another take. This way, I kept switching my roles from director to actor and vice-versa.

You are a director, actor, writer and composer. So, in which avatar do you like to see yourself the most?

Vinay: Honestly can’t segregate it as I love doing all of them. However, the best part is; all of the above happen in stages. When I am approaching a film, I write it, once the script gets locked; I make the transition as a director, then as an actor segregate it. When the post-production process begins, I do the editing work and then start wearing as a music composer. So basically, I do one thing at a time and keep on moving to the next until it is locked. So, it’s manageable and fun.

What roadblock did you faced when you were starting the shoot for Cheetiyaan?

Vinay: When it comes to making the short films, biggest roadblock is budget. So it goes round and round as we still don’t have a good ecosystem for short films. So one needs to either put all the money required to make a short film by him/her (self) or get a brand. I didn’t want any brand here because the message that I was trying to carry would have become very commercial. However I’m sure no brands would like to be a part of this film, where we are talking about Hindu-Muslim division and dealing with the core reasons for it.

What is your greatest achievement to date?

Vinay: For me, being able to make films and get the support of industry people is definitely an achievement. It’s been 9 years in Mumbai and people respect and love whatever little work I have done so far, and that is what makes me extremely grateful and thankful.

Tell us about your upcoming projects?

Vinay: I am about to begin my first feature film this year. It’s a very exciting script. It took me a few years to write it and I have written 21 drafts by now. The script is a paranormal thriller. So I am pretty excited about that and the pre-production has already started and looks like people will be able to see it next year.

Which particular filmmaker has influenced you the most?

Vinay: There are many filmmakers who have influenced me like David Fincher, Desicca, Speilberg, Nolan, Copolla, Hirani, Farhadi and many more. These people have given us some priceless cinema and they keep on inspiring me all the time.